There is a significant unmet medical need for the treatment of neurodegeneration/Parkinson’s Disease, as current therapies are limited to treating symptoms only.

USP30 is a mitochondrial-associated DUB and a negative regulator of mitophagy. Inhibition of USP30 activates mitophagy, which results in increased degradation of impaired mitochondria in lysosomes.

USP30 is a protein that has been highlighted as a promising new target in the CNS arena (Bingol et al, 2014 Nature 510: p370). It affects the Parkin pathway, which is mutated in certain Parkinson’s patients. As a mitochondrial-associated DUB, USP30, has been implicated in the control of mitophagy – a process where dysfunctional mitochondria are selectively cleared from the cell by the activation of “autophagolysosomal” degradation of dysfunctional mitochondria. Given the post-mitotic (non-dividing) nature of adult neurons, removal of dysfunctional mitochondria is essential to prevent oxidative stress, Ca2+ dysregulation, and subsequent impaired neuronal function and survival. Failure of mitochondrial quality control may lead to degeneration of the highly active substantia nigra neurons in the brain, a pathological mechanism that results in Parkinson’s disease.

USP30 will activate mitophagy, resulting in the increased degradation of impaired mitochondria in the lysosome

Supported by funds from the Michael J Fox Foundation, we are working on a research collaboration with Professor Richard Wade-Martins and his research group at the Oxford Parkinson’s Disease Centre at University of Oxford, to further address the potency and selectivity of USP30 inhibitors in translationally relevant stem cell-derived Parkinson’s disease models.

Parkinson’s disease is a chronic, degenerative neurological disorder that affects one in 100 people over age 60. There is no objective test or biomarker for Parkinson’s disease, so the rate of misdiagnosis can be relatively high. As a result, estimates of the number of people living with the disease vary, although recent research indicates that at least one million people in the United States, and more than five million worldwide, suffer from Parkinson’s disease. 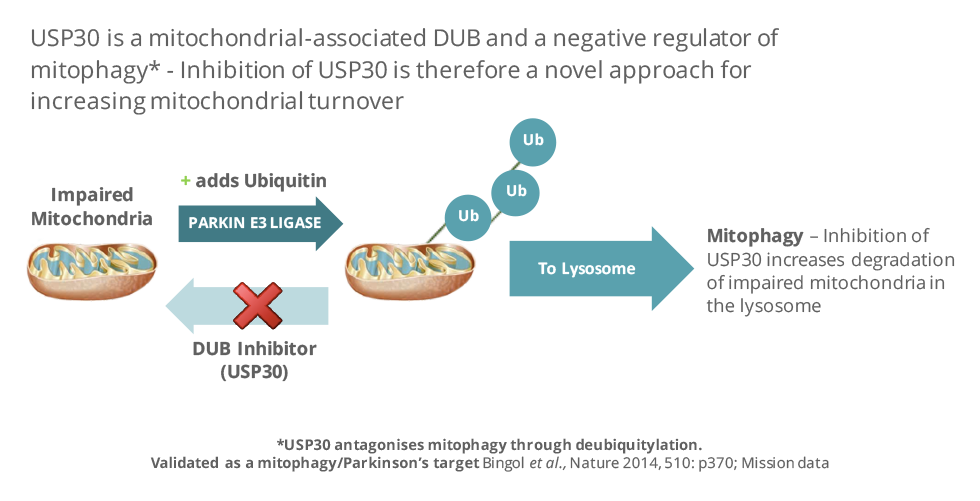